April 30, 2021 | The Architecture of Happiness by Alain de Button

Discussion Notes for Friday AM Discussion Group | (the A.M.s) 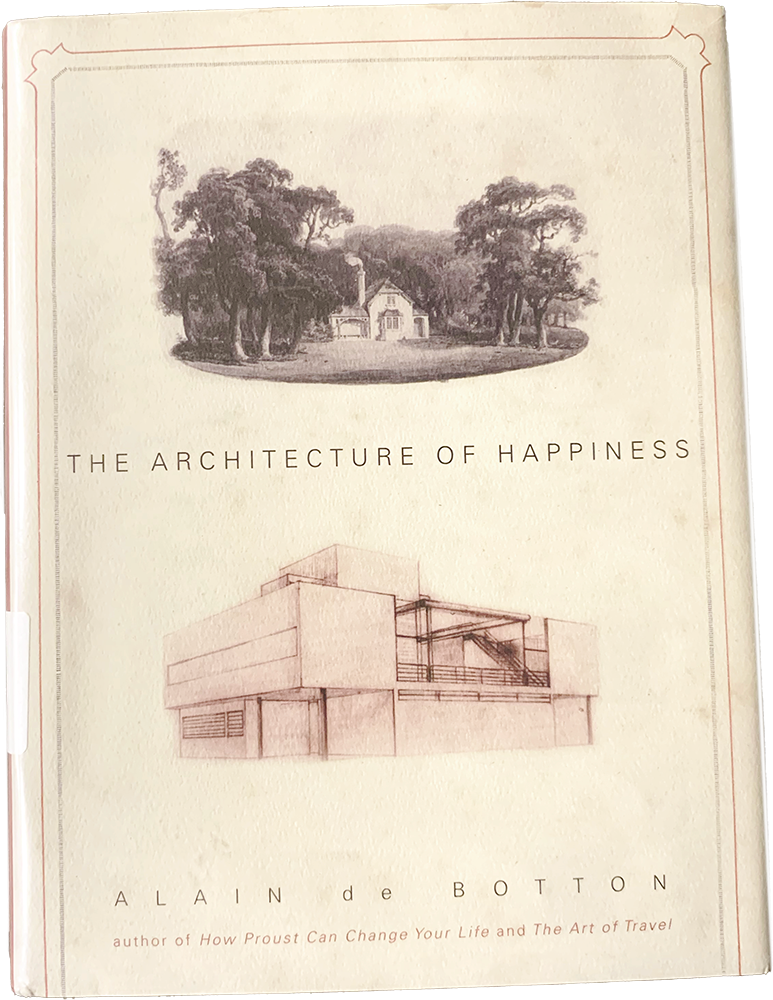 Discussion Notes for Friday AM Discussion Group | (the A.M.s)DISCUSSION NOTES May 14, 2021 Review: Given the memorial capacities of architecture, it cannot be coincidental that in many of the world’s cultures, the earliest and most significant words have been...

END_OF_DOCUMENT_TOKEN_TO_BE_REPLACED

May 7, 2021 | The Architecture of Happiness by Alain de Button

Discussion Notes for Friday AM Discussion Group | (the A.M.s)DISCUSSION NOTES May 7, 2021 Review: The moral equation between beauty and goodness lent to all architecture a new seriousness and importance. In admiring the noble patina of a mature wooden floor, we would...

END_OF_DOCUMENT_TOKEN_TO_BE_REPLACED

April 23, 2021 | The Architecture of Happiness by Alain de Button

Discussion Notes for Friday AM Discussion Group | (the A.M.s)DISCUSSION NOTES April 23, 2021 Review: To call a work of architecture or design beautiful is to recognize it as a rendition of values critical to ourflourishing, a transubstantiation of our individual...

END_OF_DOCUMENT_TOKEN_TO_BE_REPLACED

April 9, 2021 | The Architecture of Happiness by Alain de Button

Discussion Notes for Friday AM Discussion Group | (the A.M.s)DISCUSSION NOTES April 9, 2021 Review:In essence, what works of…architecture talk to us about is the kind of life that would most appropriately unfold within and around them. They tell us certain moods that...

END_OF_DOCUMENT_TOKEN_TO_BE_REPLACED

April 2, 2021 | The Architecture of Happiness by Alain de Button

Discussion Notes for Friday AM Discussion Group | (the A.M.s)DISCUSSION NOTES April 2, 2021 Review: It may be easy to laugh at the grandiloquence of claims directed at objects which on occasion resemble giant earplugs or upturned lawnmowers. But, instead of accusing...

END_OF_DOCUMENT_TOKEN_TO_BE_REPLACED

March 26, 2021 | The Architecture of Happiness by Alain de Button

Discussion Notes for Friday AM Discussion Group | (the A.M.s)DISCUSSION NOTES March 26, 2021 Review: In essence, what works of…architecture talk to us about is the kind of life that would most appropriately unfold within and around them. They tell us certain moods...

END_OF_DOCUMENT_TOKEN_TO_BE_REPLACED

March 12, 2021 | The Architecture of Happiness by Alain de Butoon

Discussion Notes for Friday AM Discussion Group | (the A.M.s)DISCUSSION NOTES March 12, 2021 Review: “The philosophy of the engineers flew in the face of everything the architectural profession had ever stood for.‘To turn something useful, practical, functional into...

END_OF_DOCUMENT_TOKEN_TO_BE_REPLACED

March 5, 2021 | The Architecture of Happiness by Alain de Button

Discussion Notes for Friday AM Discussion Group | (the A.M.s)DISCUSSION NOTES March 4, 2021 Review: ..it means acknowledging that buildings are able to solve no more than a fraction of our dissatisfactions or prevent evil from unfolding under their watch....

END_OF_DOCUMENT_TOKEN_TO_BE_REPLACED

February 26, 2021 | The Architecture of Happiness by Alain de Button

Discussion Notes for Friday AM Discussion Group | (the A.M.s)DISCUSSION NOTES February 26, 2021 Review: What is a beautiful building? To be modern is to experience this as an awkward and possibly unanswerable question, the very notion of beauty having come to seem...

END_OF_DOCUMENT_TOKEN_TO_BE_REPLACED

February 12, 2021 | The Architecture of Happiness by Alain de Button

Discussion Notes for Friday AM Discussion Group | (the A.M.s)DISCUSSION NOTES February 12, 2021 Review: ..it means acknowledging that buildings are able to solve no more than a fraction of our dissatisfactions or prevent evil from unfolding under their watch....

We need a home in the psychological sense as much as we need one in the physical: to compensate for a
vulnerability. We need a refuge to shore up our states of mind, because so much of the world is opposed to our allegiances. We need our rooms to align us to desirable versions of ourselves and to keep alive the important, evanescent sides of us.” p107

It is the world’s great religions that have perhaps given most thought to the role played by the environment in
determining identity and so – while seldom constructing places where we might fall asleep – have shown the greatest sympathy for our need for a home.

The very principle of religious architecture has its origins in the notion that where we are critically determines
what we are able to believe in. To defenders of religious architecture, however convinced we are at an intellectual level of our commitments to a creed, we will remain reliably devoted to it only when it is continually affirmed by our buildings. In danger of being corrupted by our passions and led astray by the commerce and chatter of our societies, we require places where the values outside of us encourage and enforce the aspirations within us. We may be nearer or further away from God on account of what is represented on the walls or ceilings. We need panels of gold and lapis, windows of coloured glass and gardens of immaculately raked gravel in order to stay true to the sincerest parts of ourselves. pp107-108

Question: What are your initial thoughts about the passage? Do you agree with de Botton that we need gold and lapis, et al. in order to “stay true to the sincerest parts of ourselves?” How does this square with how we see churches built today?

From AD 379, when the Emperor Theodosius the Great declared Christianity the official religion of Rome,
church architects were free to create homes for their ideals on a grand scale. Their aspirations achieved an apotheosis during the age of the cathedrals, in giant jewels of stone and glass designed to make vivid the Paradise of the holy books.

In the eyes of medieval man, a cathedral was God’s house on earth. Adam’s fall might have obscured the true order of the cosmos, rendering most of the world sinful and irregular, but within the bounds of a cathedral, the original, geometric beauty of the Garden of Eden had been resurrected. The light shining through the stained-glass windows prefigured that which would radiate in the next life. Inside the holy cavern, the claims of the Book of Revelation ceased to seem remote and bizarre, and became instead both palpable and immediate.

Touring the cathedrals today with cameras and guidebooks in hand, we may experience something at odds with our practical secularism: a peculiar and embarrassing desire to fall to our knees and worship a being as mighty and sublime as we ourselves are small and inadequate. Such a reaction would not, of course, have surprised the cathedral builders, for it was precisely towards such a surrender of our self-sufficiency that their efforts were directed… p112

The architects and artists who worked in the service of early Islam were likewise driven by the wish to create a physical backdrop which would bolster the claims of their religion. Holding that God was the source of all understanding, Islam placed particular emphasis on the divine qualities of mathematics. Muslim artisans covered the walls of houses and mosques with repeating sequences of delicate and complicated geometries, through which the infinite wisdom of God might be intimated. This ornamentation, so pleasingly intricate on a rug or a cup, was nothing less than hallucinatory when applied to an entire hall. Eyes accustomed to seeing only the practical and humdrum objects of daily life could, inside such a room, survey a world shorn of all associations with the everyday. They would sense a symmetry, without quite being able to grasp its underlying logic. Such works were like the products of a mind with none of our human limitations, of a higher power untainted by human coarseness and therefore worthy of unconditional reverence. p114

In both early Christianity and Islam, theologians made a claim about architecture likely to sound so peculiar to modern ears as to be worthy of sustained examination: they proposed that beautiful buildings had the power to improve us morally and spiritually. They believed that, rather than corrupting us, rather than being an idle indulgence for the decadent, exquisite surroundings could edge us towards perfection. A beautiful building could reinforce our resolve to be good.

The moral equation between beauty and goodness lent to all architecture a new seriousness and importance. In admiring the noble patina of a mature wooden floor, we would – after all – no longer merely be delighting in a piece of interior decoration. We would be taking in a lesson in righteousness.

We might even, the early theologians suggested, come to better understand God through beauty, for it was He who had created every beautiful thing in the world: the eastern sky at dawn, the forests, the animals, and even more domestic items like a graceful armchair, a bowl of lemons and a ray of afternoon sun shining through a cotton window blind onto the kitchen table. In contact with attractive buildings, we could intimate some of the refinement, intelligence, kindness and harmony of their ultimate maker. In the eleventh century the Muslim philosopher Ibn Sina noted that to admire a mosaic for being flawless, ordered and symmetrical, was at the same time to recognize divine glory, for ‘God is at the source of every beautiful thing.’ In the thirteenth century, from across a divide of faith, Robert Grossetest, Bishop of Lincoln, asked us to picture ‘a beautiful house, this beautiful universe. Think of this or that beautiful object. But then, omitting “this” and “that”, think of what makes “this” and “that” beautiful. Try to see what Beauty is in itself…If you succeed, you will see God Himself, the Beauty which dwells in all beautiful things.’

A second compelling claim was made for the visual when the early theologians speculated that it might be easier to become a faithful servant of God by looking than by reading. They argued that mankind could more effectively be shaped by architecture than by Scripture. Because we were creatures of sense, spiritual principles stood a better chance of fortifying our souls if we took them in via our eyes rather than via our intellect. We might learn more about humanity by gazing at an arrangement of tiles than by studying the Gospels, and more about the nature of kindness in a stained-glass window than in a holy book. Spending time in beautiful spaces, far from a self-indulgent luxury, was deemed to lie at the core of the quest to become an honorable person. pp177-118

Question: Initial thoughts? Respond to de Botton’s last comment about becoming a faithful servant of God through looking rather than reading

**All content from The Architecture of Happiness by Alain de Botton unless otherwise noted. Compiled by Chris Fox