Chapter Six, “The Poetics of Modern Art” (all quotes, unless otherwise indicated, are from the book) 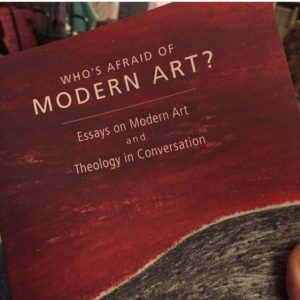 “…I had heard and read from biologist Stephen Jay Gould and psychologist Steven Pinker, evolution did not appear to take art too seriously. Gould says that art is a ‘spandrel,’ that is, and open space created by necessary architectural structures in the brain, which is ‘filled in’ by art and other kinds of less necessary activities. And Pinker argues that art amounts to ‘Sunday afternoon projects’ and ‘cheesecake’ for the mind. I have heard more-or-less similar views outside the evolutionary framework…” pages 136-137

“[Denis Dutton’s book] The Art Instinct seemed yet another argument for undermining the seriousness of art…To my surprise Dutton’s book has been helpful…[he] reprimands his fellow secular aestheticians and evolutionary scientists for misconstruing the nature of art and devaluing its importance…Drawing on his own anthropological framework…Dutton argues that artistic practice is cross-cultural and is the product of an evolutionary imprint…[he] enlists evolutionary biology to demonstrate the universal characteristics of humanity, which art reveals. Even though art is a profoundly historical and contextual practice…art works and reworks the stuff that has become our genetic imprint. Therefore, it is intellectual lazy for academics to assume that ‘art’ is only a Western concept.” page 137

“The most provocative and useful chapter in The Art Instinct for me was…entitled ‘Landscape and Longing.’ Dutton discusses the research project in the mid-1990s of two conceptual artists, Komar and Melmid…which explored which elements of painting people are most likely to prefer…to their surprise, most responded to a landscape with trees and open areas, water, human figures, and animals…No matter where the respondents lived and the landscapes with which they were most familiar, no matter their cultural or social upbringing, the majority responded in the same way…Dutton concludes, ‘human landscape tastes are not just products of social conditioning’: rather they reflect ‘prehistoric tastes’…the landscape that confronted our ancient ancestors was a landscape that required decision-making…our survival depended on our wise decisions…Dutton suggests that the pleasure we experience with some painting is due to its capacity to touch or rekindle this genetic template, stirring up within us these life-and-death decisions…” page 138

Questions: Thoughts? Think about and discuss the implications of this argument…what could it mean for Beauty and the arts in the human psyche?

“The implications of this argument are significant. The power of this genetic landscape template is the source of both kitsch and authentic art, popular imagery and high art, the source of Thomas Kinkade and Bob Ross as well as Vincent Van Gogh and Edvard Munch. While the former skim off the top of this genetic imprint, the latter plumb its emotional depths, rework it, and present it anew. Perhaps one of the rules of art criticism is to show how and in what ways the work of art participates in enlivening this genetic imprint.” page 139

“Dutton’s book shed light on a curatorial project I organized in the fall of 2010…at the Museum of Biblical Art (MoBIA) in New York City. The exhibition explored the theme of figure and landscape in Martinez Celaya’s work through the lens of biblical narratives…[and] through his readings of Robert Frost, Herman Melville, Leo Tolstoy, Soren Kierkegaard, Herman Hesse…They [Celaya’s work] are concrete and particular instances of the figure in the landscape, whether Adam, Cain, Abraham, Moses, Jonah, Jesus, or Paul, who are called, at a particular moment, to act in the world. Whether patriarch, prophet, king, disciple, leper, or beggar, the person who acts, in obedience or in defiance of God, must choose to act and must do so alone…Dutton’s book suggests that the power of art lies somewhere near this demand to choose, to act in the world with conviction…And yet art might promise something else, that despite this danger and fear, the landscape might also be a gift – more than simply a stage for our wanderings, but a home.” pages 139-140

Question: Now revisit your discussion from the first set of quotes. How do these last two contribute or challenge what you talked about?

Can you believe that summer is nearly done? Join

We had such a great time hanging out during the in

Sketchbook making is always a good idea. Join us

Remember when we said not to let the construction