This morning we read a section of “Who’s Afraid of Modern Art?” entitled The Wonderful Contradictions of Abstract Painting. Here’s an excerpt: 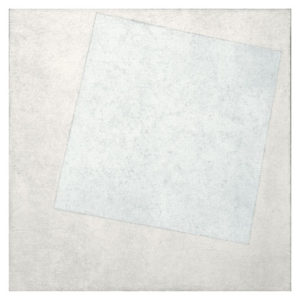 My approach to abstract painting changed nearly twenty-five years ago during a conversation with an artist friend in front of Kasimir Malevich’s White on White (1918) at a retrospective exhibition of the artist’s work at the Metropolitan Museum of Art.

As we stood in front of the painting, I was telling my friend about Malevich’s theories of abstraction and his utoptian belief that paintings of squares and rectangles could transform society. My friend interrupted me and, with his nose about as close as one could get to the painting, whispered, ‘Look at this surface! How did he do it?’ As I looked at that meticulously worked-over canvas, White on White became something other than a visual illustration of an idea, or a theory, or a historical artifact. It became a painting – a vulnerable, futile, and weak object, lovingly and painstakingly made by a human being in the midst of a world turned upside-down by World War I and the Russian Revolution.

All of a sudden, Malevich’s rhetoric about the ‘supremacy of pure feeling or perception in the pictorial arts’ and his desire to ‘free art from the ballast of the objective world’ faded away, as did all my art history and art theory, and I was brought face-to-face with a surprising fact. In the midst of chaos and exhilaration, of hope for a new world and a new humanity, Malevich painted a picture of a white rectangle on a white background. What a wonderfully absurd thing to do. And what an odd – and defiant – response to the Russian Revolution. But perhaps more surprising, I experienced its defiance directed at me, the art history graduate student, the theoretician, the one with a head full of ideas. White on White seemed to cut through all of that noise to confront me not as a would-be professor and scholar, but as a human being who was busy with thoughts about how his work was going to transform fields of study. It offered new ways of thinking about modern art.” pages 140-141

This week with Friday Arts Project: Wednesday our

Friday Goals: Join in an in-person no content dis

It has been such a gift to have @sarasimpsonart fi